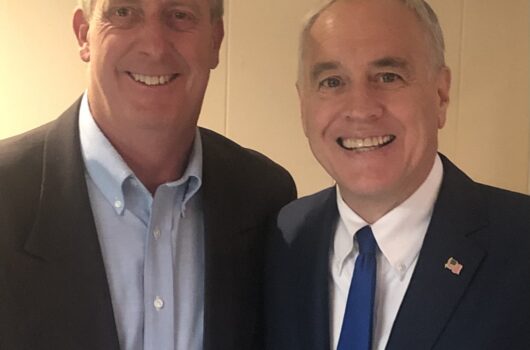 Local Cortland County Democrats of all ages crowded the events room at the St. Charles Hotel in Cortland to enjoy an evening of food, drink, festivity and inspirational speeches. Chairman, Tim Perfetti, shared that the committee was “…honored to host NYS Comptroller, Tom DiNapoli, as he is barn storming the state in advance of Election Day. Tom’s message was clear. Based on the new congressional district maps, Cortland could be the most consequential county in both the U.S. Congressional and NYS State Senate races on November 8th.”

Perfetti and DiNapoli both gave impassioned speeches about the importance of Democrats turning out for what may be the most significant midterm elections of our lifetime. “When Democrats vote, Democrats win,” DiNapoli extolled.

The entirety of Cortland County is now in the 19th Congressional District of NYS which runs from as far West as Tompkins County, as far East as Greene County and as far South as Sullivan County, and also includes all or portions of Broome, Chenango, Columbia, Delaware, Otsego, Tioga, and Ulster counties.

Democratic candidate for the NY CD 19, Josh Riley, is a native and resident of the district, being born and raised in Endicott, NY and a current resident of Ithaca, NY. Riley easily won his Democratic primary in August, 2022 and now faces a Republican challenger who is a resident of Dutchess County which is outside of the 19th Congressional District.

DiNapoli reminded attendees the importance of voter turnout both for keeping the House and Senate to save our democracy as a country but also supporting NYS Senate candidate for the 52nd District, Lea Webb and NYS Assembly incumbent, Anna Kelles.